You are here: Home / Artists / The Fair Maids of Perth 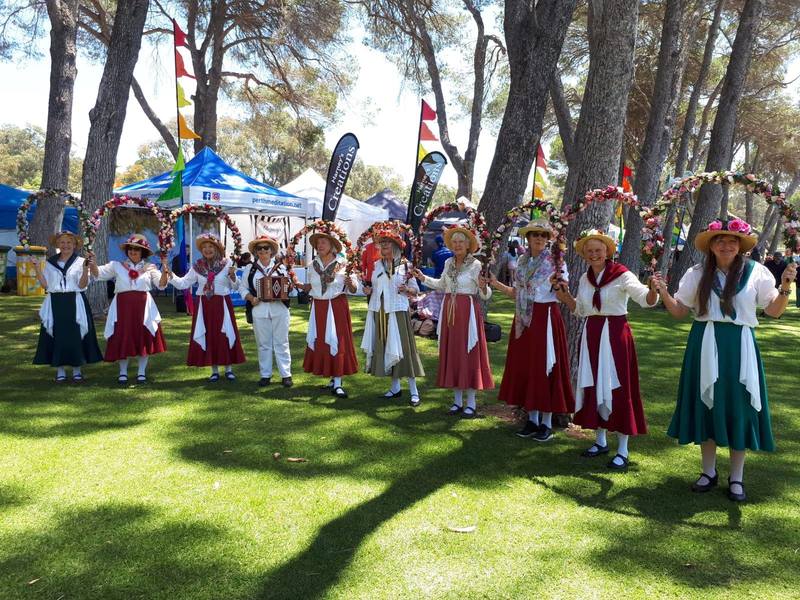 Perth, Western Australia
The Fair Maids of Perth performs dances which are said to have been started by textile mill workers of Cheshire, Lancashire and Yorkshire in the 19th Century. Dances were usually named after their place of origin, and were often danced in procession along the streets of towns and villages of north-west England during holiday times such as the “Wakes weeks”; at Whitsuntide; in May Queen parades; church rush-cart processions, and various fairs and fetes. We still perform at all kinds of events – May Day dawn in KIngs Park, market days, folk/medieval festivals, shopping centres, school fetes and district fairs. Our costume is based loosely on the clothing that was worn by the female mill workers of the 19th Century, and we wear identical wooden-soled clogs which were made in Lancashire. Our display is colourful and lively and includes the use of ribboned sticks, flowered garlands and large white hankies. The traditional music for our dances is played by our talented musicians, on melodeon, accordion, fiddle and drum.
The Fair Maids of Perth was founded in 1978, and we are proud to continue to dance in the North-West tradition.
Website
Facebook