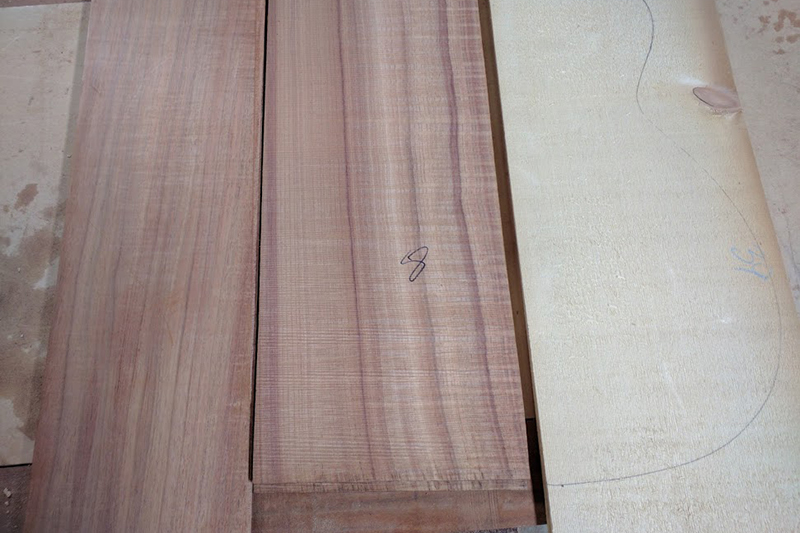 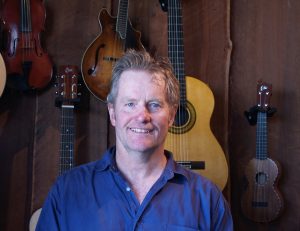 Follow the progress of Scott Wise’s All-Australian guitar right here – see how this sought-after musical instrument develops from carefully-chosen pieces of wood?to a work of art!

The finished guitar! ? So how does it sound and play?? I’m very happy with it.? Set up with 12 – 54 light strings, which most people use, it sounds full and rich on the open chords and has great midrange punch as you play up the neck, which will make it very versatile for flat picking, fingerstyle, blues and even jazz voicings.

The European spruce top gives a real brightness and harmonic richness which is reinforced by the beautiful blackwood back and sides.? With the hundreds of blackwood ukulele I have built in the last decade I have really come to love this wood.? The wandoo fingerboard, a mid-tan colour now will darken to a rich chocolate brown. Below is a picture of the 2001 Fairbridge guitar fingerboard to show this darkening.? The more you play it the darker it gets!

Buy a few raffle tickets and help the festival.? I hope you win!

The finish sanding is all done.? The body is masked up ready for a sealer coat. ?There will be four lacquer spray sessions. ?A very light sealer and grain- fill, a full sealer, a fill coat and a finish coat with a lot of sanding back in between coats. ?The second picture shows the neck and the body hanging separately in the spray booth about midway through finishing.? It will rest a few days and is then polished up, assembled, bridged and set up over a couple of days.? The next pictures will be of the finished guitar! 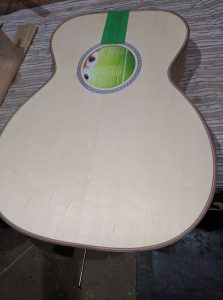 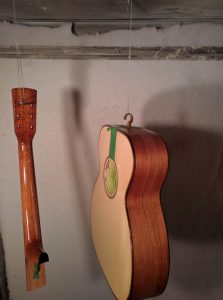 The neck is finished and attached to the guitar body temporarily and the fingerboard rounded to a 6 metre radius.?? You can see the mini router at the end of the neck with which the inlay cavity at the 5th fret is cut.? On all WA wood guitars, and most previous Fairbridge guitars, I inlay a little tree at the 5th fret.? The second photo shows the cavity being finished with a carving tool and the third photo shows the nickel-silver frets being installed after some abalone dots for position markers have been inlaid. This completes the building part.? After this, the meticulous and tedious finish sanding.? I’ll spare you that… 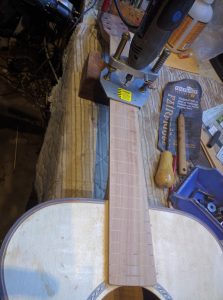 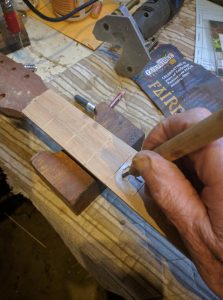 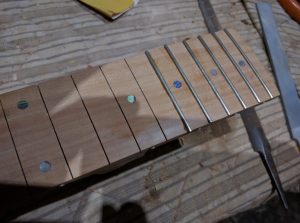 Now the body is all bound, the various parts of the neck assembly are glued together.? The Queensland Maple neck wood parts are prepared and glued together.?? Queensland Maple is a marvellous guitar wood for necks, backs and sides.? Stronger than the traditional mahogany, and often lighter it is ideal for steel string guitar necks.? The West Australian Wandoo fingerboard has been shaped, slotted for frets and glued.? It will be rounded and inlaid after carving.? Also, an adjustable truss rod has been fabricated and embedded in the neck.

The picture shows the neck assembly with the fingerboard just glued.?After the glue is dried and cleaned up, the neck will be carved. 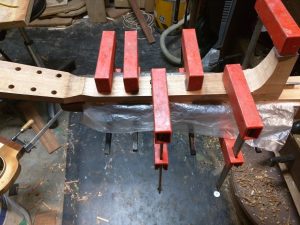 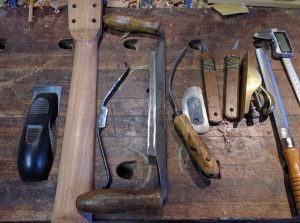 The carved neck prior to fingerboard work, and the tools used to get it there.

The square neck assembly is now carved into shape with a variety of hand tools. This picture shows the drawknives I use for the first cuts, this is followed by a spokeshave, scrapers and finally, sanding. 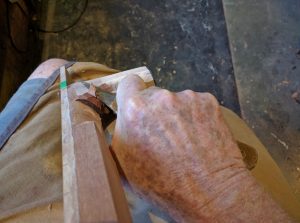 With the body all closed up, rebates are cut around the top and back glue joints and the wooden body bindings are installed.? This picture shows how they are clamped on with stretched lengths of tyre inner-tube.? You can also see through the gaps a preview of the top purfling.

Why wooden bindings?? They are the traditional way of protecting the edges of guitars.? The white, black and other colours of plastic bindings were first introduced by American guitar factories in the 1920s with the new miracle material celluloid which was so quick and easy to install.? Inherently unstable, celluloid disintegrates with time leaving a nasty restoration job for repairers in the future.? Likewise, the other plastics used in the 1970s.? More modern plastics like ABS do not suffer the disintegration and shrinkage of others (yet) but also do not adhere very well, and are simply not as strong as wood.? So that expensive instrument with the white plastic binding you might have brings with it a big compromise.? To make authentic-looking archtop mandolins and guitars I sometimes use white plastic binding but lately, I have gone over to my own look using rosewood.? End of binding rant!

Almost ready for the neck now… 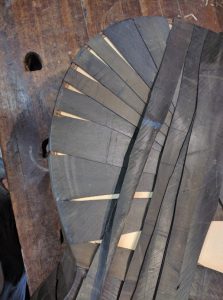 The braced back is glued to the sides using the same go-bar clamping method as was used for the top.? The body is now all closed up and ready for the wooden bindings to be installed to protect the glue joints. 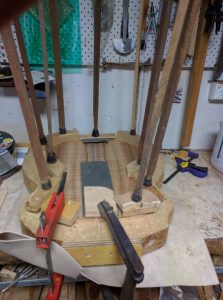 After the glue has dried completely, usually 24 hours or more, the back braces are shaved to final thickness before fitting the back.? The braces of the top are also given their final graduation, with tapping, listening and planing using small violin maker’s planes.? This is an all-important step and marks the difference between responsive hand made guitars and factory instruments. 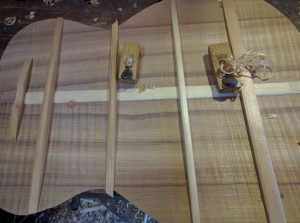 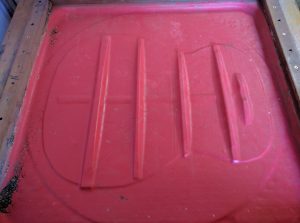 The back braces and many of the top braces are glued in this vacuum press.

The centre joint of the back is covered with a cross-grained strip of spruce, an offcut from the end of the top.? This supports the glue joint, which is covered on the outside of the guitar by a decorative mosaic inlay, which you will see in a later picture.? The reinforcing strip does not need to be more than veneer thickness, so this shot shows it being planed down with a brass block plane before being notched for the transverse back braces. 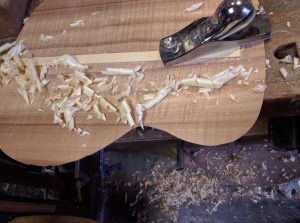 The last brace is glued to the guitar top.? It is a massive transverse brace passing under where the fingerboard will terminate above the soundhole.? The adjustable truss rod nut for the neck reinforcement will pass through this brace. 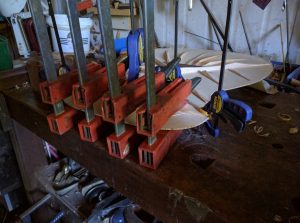 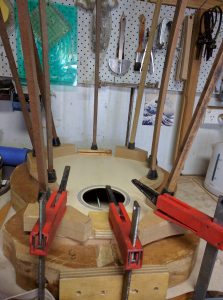 With the bracing of the top finished, the braces are further shaped and then the complex joint between the top and the sides is prepared, with the glue linings on the sides notched to take the braces at the edge of the top.?? This makes a very strong structure.? The top is glued to the sides using go-bars, a clamping system used in traditional Japanese woodworking, and by luthiers worldwide.

Now the back can be prepared…

These two shots show some detail of the various stages of making the guitar top.? The bracing is glued is several stages and a preliminary shaving of the braces is carried out between stages, with the final “voicing” of the top happening over a couple of days after it is glued to the sides in the assembly mould. 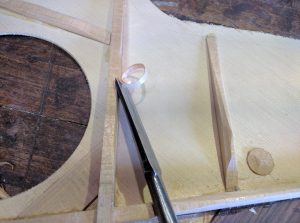 The second picture shows the unique hybrid X/fan bracing pattern I have used in the last two Fairbridge guitars. ?It is designed to produce a robust steel string sound with enhanced midrange response for fingerstyle playing.? This is just a preliminary shape of the braces, but you can see the complexity of the design?and a sculptural quality.

In the meantime, work has started on the top and back plates.? This shot shows the figured blackwood back after final scraping to near finished thickness. 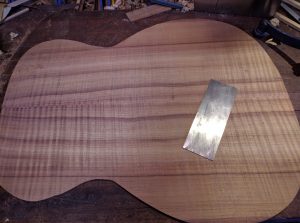 The bent sides have been stabilised in the assembly mould for a few days and are trimmed to length so the neck and tail blocks can be glued into the mould. 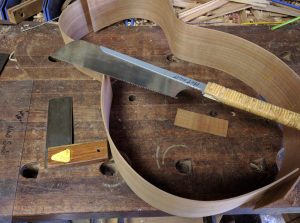 The blackwood sides are bent by hand on an electrically heated bending iron and will be held in an assembly mould to stabilise before the end blocks are glued in. 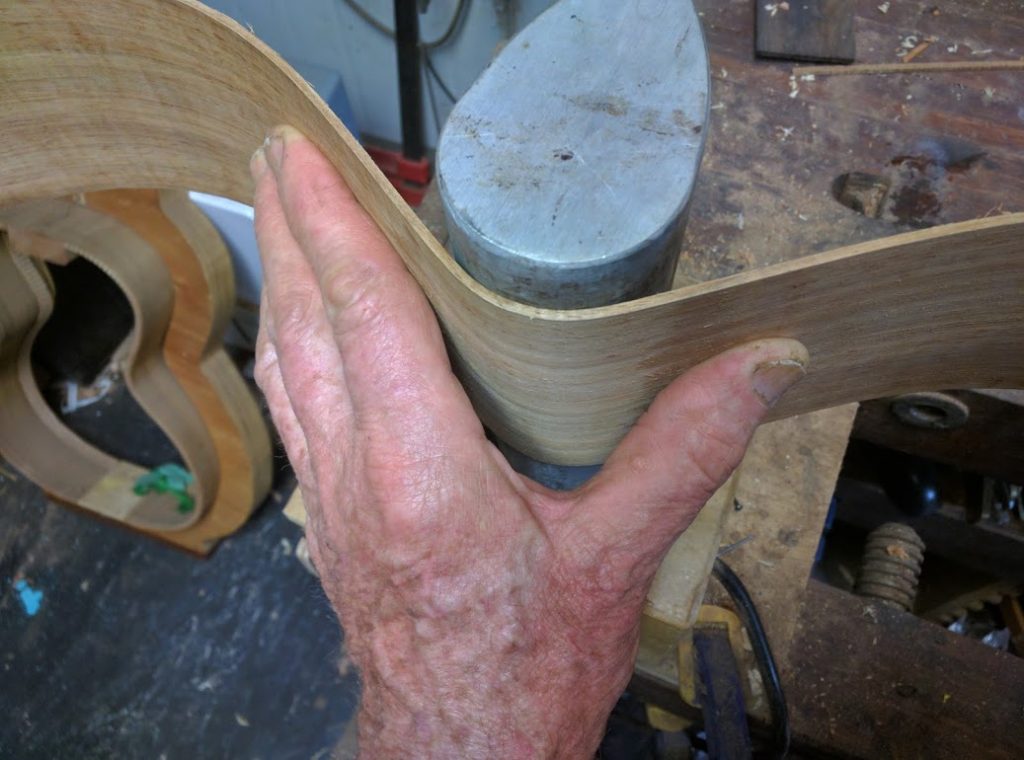 The guitar top is close to final thickness, and the sound hole rosette is inlaid before cutting out the hole. The back has a matching “wave”
pattern inlay down the centre. The sides are thicknessed ready for bending. 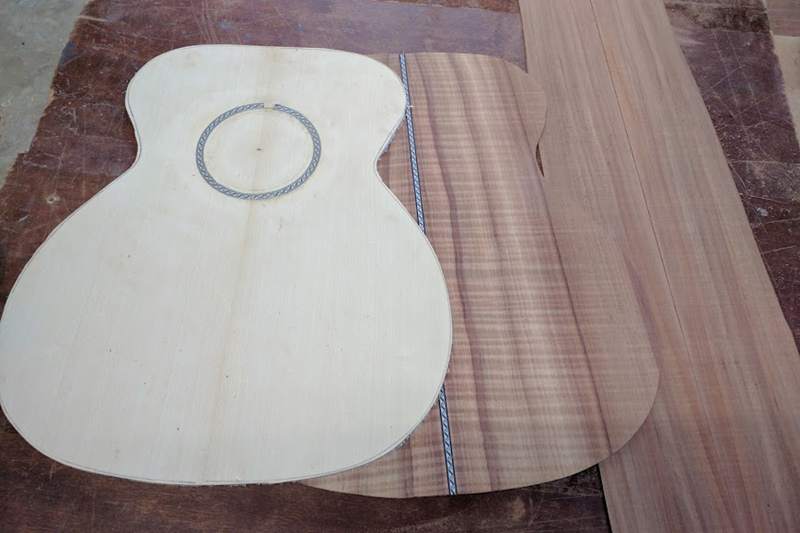 This shows the spruce top joined and clamped while the glue sets. Both the top and back are joined this way ready for cutting out the shape of the guitar after a day’s resting. 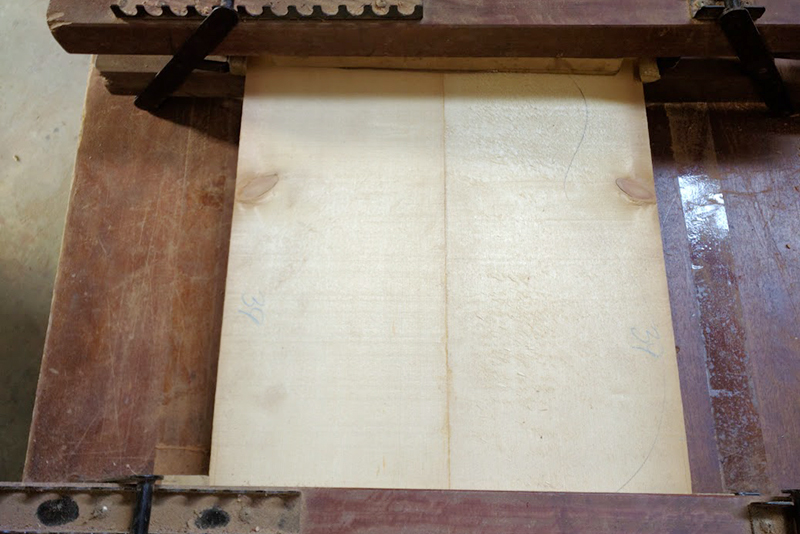 This first shot is of the three pairs of tonewood panels which will make up the body of my Model 3 guitar which will be the 25th Fairbridge raffle guitar. The two left hand pairs are Tasmanian Blackwood, the sides and the back of the guitar, rough sawn, prior to thickness sanding.

Australian Blackwood (acacia melanoxylon) is now a highly sought-after tonewood and this back panel is a special one I have been saving for many years.?Apart from its spectacular figure, it is very stiff, light wood, which coupled with the German spruce top, will produce a very bright, rich sounding instrument with lots of complex overtones.?I source my Blackwood from the only licensed cutter in Western Victoria.?It is strictly controlled.

The pair on the right is European spruce from Germany, which I collected in the 1990s. The spruce forests in Germany are, as you might imagine, strictly controlled and sustainably managed and this came from the top half of a 200 -250 year old tree.?You can see a knot where a branch was formed.? This knot will be cut out in the waist part of the guitar top.

I am already imagining the sound of this guitar as I select and prepare the wood.?This is an important part of the whole process.